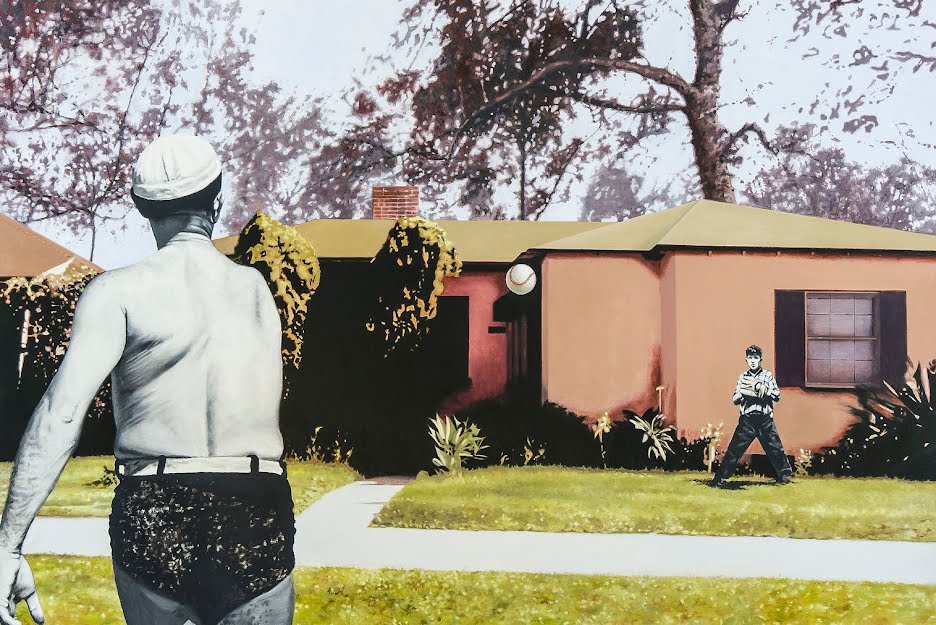 Catch was among the oil-on-linen paintings on view in American Dreams at RISD’s Sol Koffler Graduate Student Gallery.

When Martin Mull 65 PT/MFA 67 visited RISD in early March, it was the first time the artist—who’s also a longtime TV and film actor/comedian—had been back on campus in more than 30 years. He appreciated the changes but was also happy to find so many of his old haunts from the 1960s still intact. Before Mull took center stage at the opening reception for American Dreams, the exhibition of his recent paintings on view at Sol Koffler Graduate Student Gallery from February 15–March 12, he visited studios, spoke to small groups of students and faculty, and made time to respond to a few questions.

What have you shared with students the past couple of days?
That art isn’t a step deal. It’s not like you do high school, then undergrad, then grad school and then life. Art is not that.

I honestly don’t think I hit a stride where I could say, “These are the pictures I should be making” until I was well into my fifties. And still, when I get home from this trip I will try something else new, too.

When I was at RISD a wonderful teacher named Dean Richardson 56 PT used to say that he wasn’t interested in any painting where he didn’t sense that a discovery was made. I like that idea—of learning and discovering something new in each step of making a painting. That’s what I tried to tell the grad students I spoke to yesterday: This is just the beginning of a journey, so be patient. That’s important to know.

So what did you take from being at RISD?
What I think happens here is that you grow into being a person. A road through the world emerges, a path is suggested. If you stay on that path for a little bit, then you can start to find out who you are as a human being….

I actually think of the work I made during my six years at RISD as pretty floundering. I was looking for anything—I was looking for everything. I would glom onto certain people like Matisse (who I tried to imitate) or look at current art magazines and try to become cutting edge—which I’m not! I’m as dull as a butter knife and always will be.

In American Dreams are you drawing on your own memories of growing up in the 1950s?
I am. A drawing teacher I had here named John Frazier [a 1909 Painting alum, longtime professor and RISD president from 1955–62] said, “Look at art—at all the art you can look at—and look at your life.”

Well, at this point I’ve definitely [done that] and most of [my life] is now in the rearview mirror. I don’t regret or bemoan that. It’s just a fact. But when I do look back, man! The first three or four decades of my life just pissed by!

Do you see these paintings as challenging a Norman Rockwell vision of the ’50s?
In that I’m a product of that narrative, I have to allow that at least the lion’s share of it is true—because it did create me. You can’t bely the societal sperm and egg of who you are.

Do I challenge a bit of it? Yes. Someone once said, “We portray ourselves as we would like our enemies to see us.” So back then if someone asked you, “How is your family doing?” you would tell them, “We’ve got a washer, a dryer, two cars in the garage and one of those lawnmowers that you sit on. The kids are in school, everything’s great,” because that's how you wanted your enemies to see you—as invulnerable.

But I also think the era hasn’t been chronicled as well as it should be. It’s like when Audubon found 9,000 varieties of birds in the woods and said, “Someone needs to make a record of this because some day some of these won’t be here.” To some extent my paintings of that era are made in the same spirit: That era is gone. Things are changing rapidly.

In fact, I was terrified of talking to undergrads here because with about 50 years difference between us, I wasn’t sure that I even had a code for communicating with them. The world has changed that much. But I can only represent the genealogical, historical district that I come from—and that’s what is in my paintings.

You identify as an artist first, but how did you end up with a successful career as an actor, too?
First of all, art materials cost money, a studio space costs money, and so… I could have driven a cab, I could have worked in a lumberyard, I could have delivered papers or I could be on a sitcom.

The latter pays a lot more and gives you vast periods of time off, so it seemed like the gift horse of all time—and not a Trojan one. Acting has been very good to me. I’ve been extremely fortunate.

Are there times when acting has given you a break from the studio? Or vice versa?
Absolutely. Painting is a solitary process. It is a one-person operation: You are judge, jury, defendant and litigator. That can get very lonely—to the point where you feel like you’re in a cave somewhere.

Each one became the therapy for treating the other. That was great. Still is.

You said you’ll begin working on something new when you get back to California. How do you approach new projects?
I think the easiest part is the start of something. That’s when you own the process. But with any picture there is a point—good, bad or indifferent—when it starts calling the shots.

The picture tells you that it wants a jet plane in the upper right corner, or other paintings in the room do. You look back and forth from what you’re working on to what else you’ve made and… you get suggestions.

At that point it doesn’t come from you anymore. You become the artisan, not the artist. I crave that. I love being the workman. Just take the word poet and throw it out the window. It’s a self-conscious thing to think that you’re “telling truths” or something. No! I’m painting a picture! And I’m working on it as hard as I can. When I’m in that mode it’s just heaven on a stick.

What Are You Looking At?

Painter Robin F. Williams returns to RISD to discuss the inspiration behind her self-possessed female figures.