Art = New Plus at LaGuardia 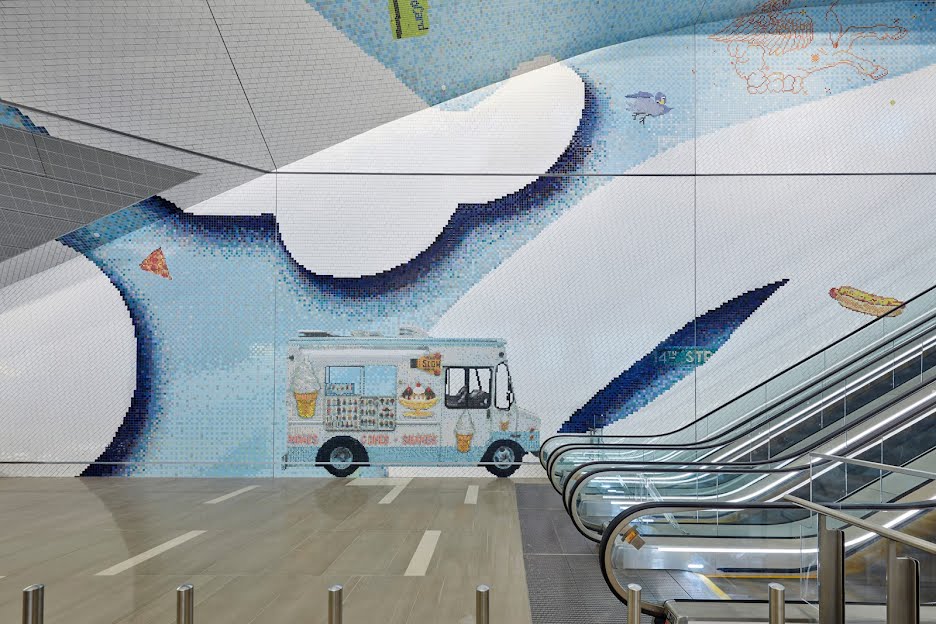 Detail from Laura Owens’ I 🍕NY (handmade glazed ceramic tiles and grout), commissioned by LaGuardia Gateway Partners in partnership with the Public Art Fund for LaGuardia Airport’s Terminal B.

Though the good news has been overshadowed by the pandemic and related crises, New York has put art at the center of its transformation of La Guardia airport. Laura Owens 92 PT is among the four international artists selected to make stunning, site-specific work for the airport’s soaring new Terminal B, which officially opened on June 13.

Based in Los Angeles, Owens is known for her wonderfully experimental—and often irreverent—approach to the formal conventions of painting. Since the 1990s she has continued to poke, prod, provoke and push her own process, which has put her at the forefront of contemporary art.

In fact, the artist who in her early 20s coached herself to “think big,” “contradict [her]self constantly” and let go of both guilt and fear, has done well by following her own advice—as her critically acclaimed 2017 survey exhibition at the Whitney confirmed. Most recently, she has been experimenting with multimedia installations that explore the construction and consumption of contemporary visual culture.

For her I 🍕NY installation at La Guardia, Owens worked with the largest interior wall of the new terminal and chose ceramic tile as her medium—for the very first time. Working remotely during the pandemic, she oversaw the installation of the 625,000 tiles that were hand-laid to create an almost 25,000-sf image with a pixelated and pointillist feel. In the expansive skyscape, puffy white clouds float in a variegated blue sky, interspersed with 80 iconic images referencing the history, culture and quirky charms of New York City.

In addition to the pizza in the title, Owens has playfully worked in images of the Staten Island Ferry, a MetroCard, the Apollo Theater sign, a hotdog, an ice cream truck and subway signage, among other things. The piece includes a welcome sign and land acknowledgment in the Lenape dialects of Unami and Munsee, along with English. And since the tiles emulate pixels, the imagery morphs from impressionistic to abstract to recognizable depending on where viewers stand.

“As we open a new La Guardia..., these four site-specific works... provide focal points of beauty that reflect the creativity, energy, culture and spirit of the Empire State,” Governor Andrew Cuomo noted at the opening ceremony. “Public art is a key medium to show the world who we are and to say [that] when you come to New York you will be amazed and inspired.”

Part of the overall $8-billion transformation of the airport, the new terminal was envisioned as both a practical transit hub and a portal to the city’s vibrant culture. In 2017 LaGuardia Gateway Partners and the Public Art Fund initially invited 25 artists from 11 countries to present preliminary proposals for the new terminal that would project the vitality of the city.

“The goal was not simply to place existing works of art in an airport, but to commission four of the world’s leading artists to create ambitious site-specific works,” the Public Art Fund states on its site. In addition to Owens, artists Jeppe Hein, Sabine Hornig and Sarah Sze drew on their personal experiences of NYC and the open, airy architecture of the terminal to create work that reflects “a richly-layered global city defined by its creative energy, openness, diversity and democratic spirit.”

Just as the nine-month-long installation of I 🍕NY was reaching its peak this spring, the pandemic complicated an already ambitious project. Owens has been in lockdown since March, but like so many others who have needed to improvise this year, she relied on an intense volley of photos and videos with installers in NYC to finish approving the placement of each of the 625,000 tiles.

Calling I 🍕NY a love letter to the city, the Public Art Fund’s director and chief curator Nicholas Baume says, “because it’s a skyscape, it puts you in the air and turns a landscape with the icons we know from physical space into a kind of wonderful fantasia. These four artists,” he adds, “have helped to transform this vital infrastructure into a powerful new civic landmark where art is an essential part of the fabric of the building itself.”