What Are You Looking At?

Painter Robin F. Williams returns to RISD to discuss the inspiration behind her self-possessed female figures. 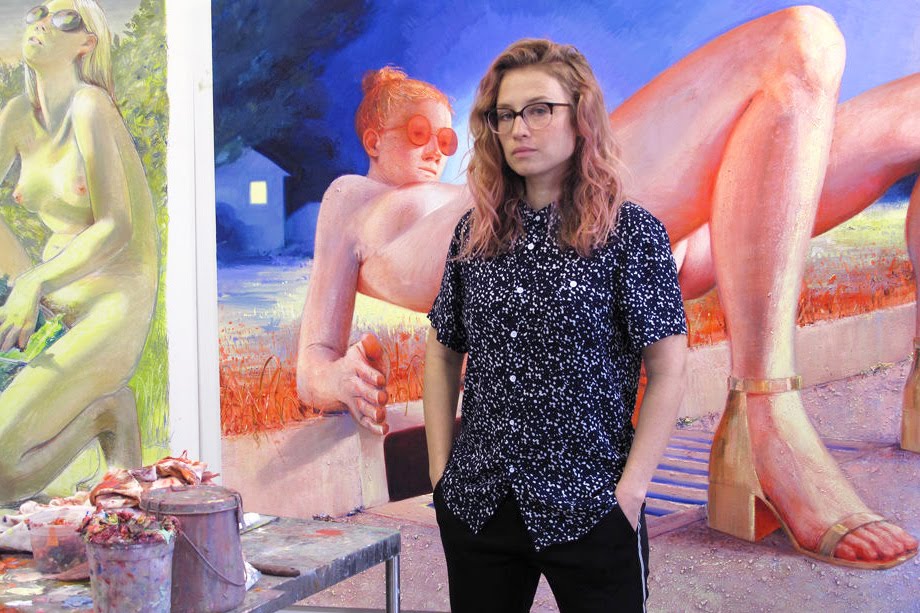 Artist Robin F. Williams 06 IL stands in front of her large-scale painting In the Gutter (2015).

In the decade-plus since earning her degree in Illustration, Brooklyn-based painter Robin F. Williams 06 IL has shown her monumental works on canvas in six solo exhibitions—mostly in NYC, where she’s represented by the highly regarded P.P.O.W Gallery.

The prolific artist returned to RISD on November 14 to discuss her burgeoning practice with current students and explain how humor and research play into her process.

A figurative painter before the genre was popular, Williams was at first hesitant to depict women in her work because she was nervous about objectifying them.

But by playing off those fears and creating female composites that are both aware of their place on the canvas and adamantly unwilling to submit to a dominant male gaze, she was able to break through creative barriers and take her practice in a powerful new direction.

With Pleasure, Williams' fall solo show at Various Small Fires (VSF) in Los Angeles, marked her debut exhibition on the West Coast and drew a lot of interest from viewers new to her work.

“To those art-world denizens who like to dabble in a theoretical approach,” writes Ted Loos in W Magazine, “Williams is providing catnip in the way she has exploded and rethought ideas about the gaze—that objectifying view of women by men, or of a subject by a viewer.”

Williams laughed as she told students that some people questioned whether she was promoting bad habits through the work in her previous solo show at P.P.O.W. in NYC. Called Your Good Taste is Showing, it featured bold portraits of women challenging the viewer’s gaze, including its namesake painting of a woman smoking two cigarettes.

But as she explained during her talk, the images reference and question the blatantly sexist advertising tropes that have long dominated American culture, as well as classic icons of femininity such as Brittney Spears and Jane Fonda.

In her painting Salad Lover (2016), Williams is clearly both having fun with and critiquing the absurdity of marketing firms and consultants interpreting female desire.

In addressing the subtext of images in ads and popular culture, Williams continues to push her practice in new directions. And as she explained in response to a student question about her ever-changing style, she prefers to shake up her process on a regular basis, adopting new techniques with each piece.

In recent paintings, for example, she mixed oils and textured acrylics and experimented with air-brushing, staining canvasses and developing a unique approach using a paintbrush and a length of string like a compass to create a radial gradient as a backdrop.

“I’m taking controlled risks in every painting I make,” she says. “That’s how I keep myself interested.”