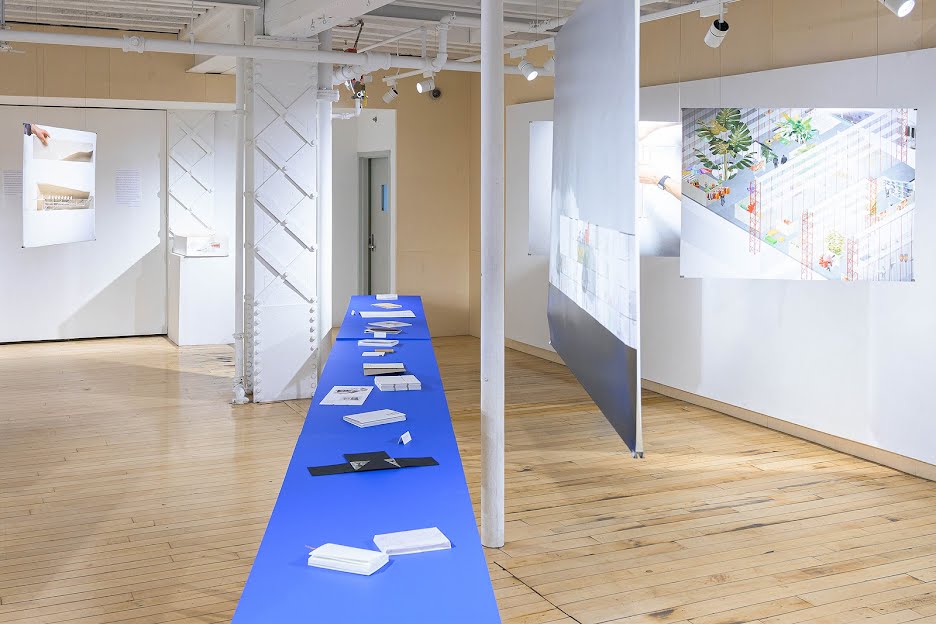 Just prior to the opening of re- un- in- de-, the second of five Wintersession shows in Architecture’s BEB Gallery. photo by Yunchao Le BArch 20

Watching friends in other departments mount wonderful senior shows across campus inspired Architecture majors Sophie Chien BArch 20 and Benjamin Han BArch 20 to do the same. So the two approached Architecture Department Head Amy Kulper with the idea of curating a series of fifth-year student exhibitions, which are on view in the BEB Gallery over Wintersession.

“Amy was on board right from the start,” Han says of the new initiative, “which really demonstrates how open the Architecture department is to student input and change.”

Chien (a former president of the RISD Student Alliance) echoes that sentiment, adding, “You can really make things happen at RISD—maybe because it’s so small or maybe because it’s an art school. I feel heard here in a way that I don’t think I would elsewhere.”

Chien and Han both had previous curating experience—Han within the department and Chien as part of the Global Initiative team that conceived of the -ISMS exhibition, mounted in 2017 in conjunction with the visit of civil rights activist Emory Douglas to RISD.

But both agreed that the best approach to launching the series of student shows would be to invite their peers to participate directly. With that in mind, roughly 30 students formed five groups that each developed a specific theme and approach.

The first exhibition, ODD SUM, was meant “to define ourselves holistically—not just as architects, but as thinkers, makers and contributing members of our communities,” note the students who participated.

The second, re- un- in- de-, explored prefixes as analogies for ”the processes that have defined our methodologies and driven this collection of work.” It also focused on language itself, which drives critiques, discussions and studio practice.

“The point of the shows is to develop everyone’s voices,” Chien explains, “so it was up to each group to curate whatever they wanted to show. We did encourage people to include work in a range of mediums from all five years at RISD.”

They worked within a budget covering materials, catering and photography, and Assistant Professor Nancy Nichols advised student curators on the nuanced best practices for hanging a show in the BEB Gallery.

Each of the remaining exhibitions—1,875 Days, BIG SMALL and Architecture(ish)—follows its own path in trying to show the wider community just what it means to major in Architecture at RISD.

The basic question, Chien explains, is: “What have we done and why does it matter? Getting a framework for producing ideas is more important than, say, becoming proficient in AutoCAD. These shows exemplify how we can use different mediums to push architectural ideas in new directions.”

“I think everyone got a lot out of the experience,” adds Han. “Architecture students are used to presenting their work with professors and guest critics in the front of the room and everyone else in the back. This setting is less hierarchical and makes some students uncomfortable—in a good way.”

Han and Chien are also among a group of Architecture students showing work in (RE)POSITION, a winter exhibition co-curated by fellow fifth-year Cherry Yang BArch 20 at the Gelman Student Exhibitions Gallery (January 24–March 1).

“Most Gelman shows include work by maybe one Architecture student, but this one really focuses on our department,” says Chien. “It’s great to feel like we’re part of the larger discussion at RISD.”

Students in a fall Landscape Architecture studio collaborate with residents of Fall River, MA on interventions for revitalizing the city’s downtown.

A multidisciplinary exhibition curated by seniors Hannah Bartlett 19 FD and Raina Wellman 19 GD reflects on chairs as both objects and symbols.

The Lay of the Landscape