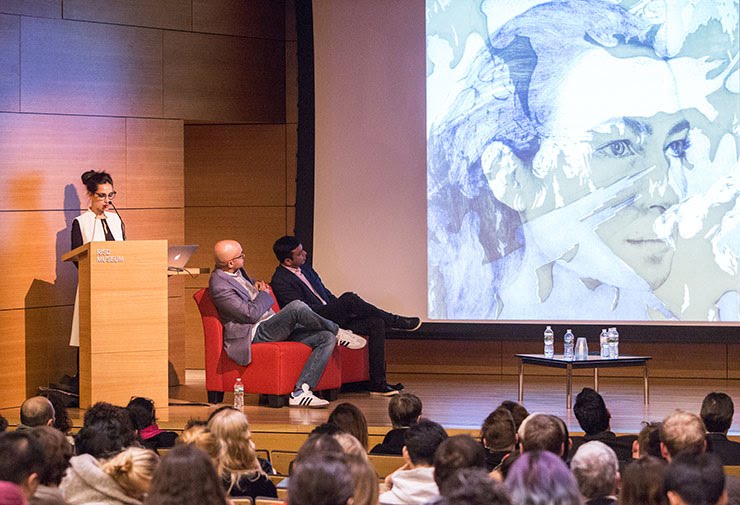 Speaking on the night of 2016’s final US presidential debate, MacArthur Award-winning artist Shahzia Sikander MFA 95 PT/PR delivered a powerful message about the power of art to transcend divisive rhetoric. “Creativity has no national, racial or religious boundaries,” she observed, speaking to a full house in the RISD Auditorium on October 19. “It is the power of the imagination that fosters new discourse and creates new frontiers.”

As she delivered the RISD Museum’s Gail Silver Memorial Lecture, the Pakistani-born artist offered insight into the critical impulses that inform her multidisciplinary practice. “Art, at times a solitary practice, is sustained by the desire to connect and communicate,” Sikander pointed out. As RISD’s 2016 Kirloskar Visiting Scholar in Painting, she’s following through on that desire this fall through a series of open conversations, seminars and informal crits made possible by a generous gift from RISD parents Vikram and Geetanjali Kirloskar of India.

On Tuesday, October 25, the first event in that public programming brought Pulitzer prize-winning writer Ayad Akhtar to campus for an open conversation with Sikander on collaboration and changing perceptions of identity – and in particular, of Muslim identity in the US. Assistant Professor of Literary Arts + Studies Avishek Ganguly and Professor of Painting Dennis Congdon 75 PT also participated in the fascinating discussion, which covered a broad range of thought.

As Muslim artists working in the West, both Akhtar and Sikander spoke about the challenges of referencing the Prophet or the Koran, for instance, while knowing that such references escape most readers and viewers. “I’m not a believer of my faith, I’m a reader of my faith,” Akhtar pointed out in one of many insightful comments that resonated with the audience. The two artists also compared notes on their love/hate relationship with the solitary nature of their own practices, the compulsion or “restlessness” to create and the power of paintings and plays to impact our lives well after the initial viewing or theatrical experience.

During the Gail Silver lecture, Sikander showed work that exemplifies her “multivalent and multidisciplinary approach” to making and the deep connection of her increasingly multimedia output to the act of drawing – an activity she calls “her thinking tool.” In speaking about such recent work as a 60'-plus mosaic and multilayered glass painting that will soon be on permanent display at Princeton University, her Gopi-Contagion (2015) piece in Times Square and Disruption as Rapture (2016), a site-specific video installation at the Philadelphia Museum of Art, she noted that “disruption as a means of exploration is a consistent element in my experimental strategy.”

Connecting the large-scale ambitions of her recent work to her early investigations into Indo-Persian miniature painting, Sikander also underscored how she employs traditional forms to push the possibilities of visual expression. “For me art is not just an impulse to make aesthetically pleasing objects,” she avowed. “It has been from the very beginning an instinct to think and imagine.”

During the Q+A session that followed, a student asked Sikander if she sees her work more as a window into the artist’s world or as an insistent “call to action.” It’s a bit of both, she admitted: for her, the act of making art “is a call to action—every day.”