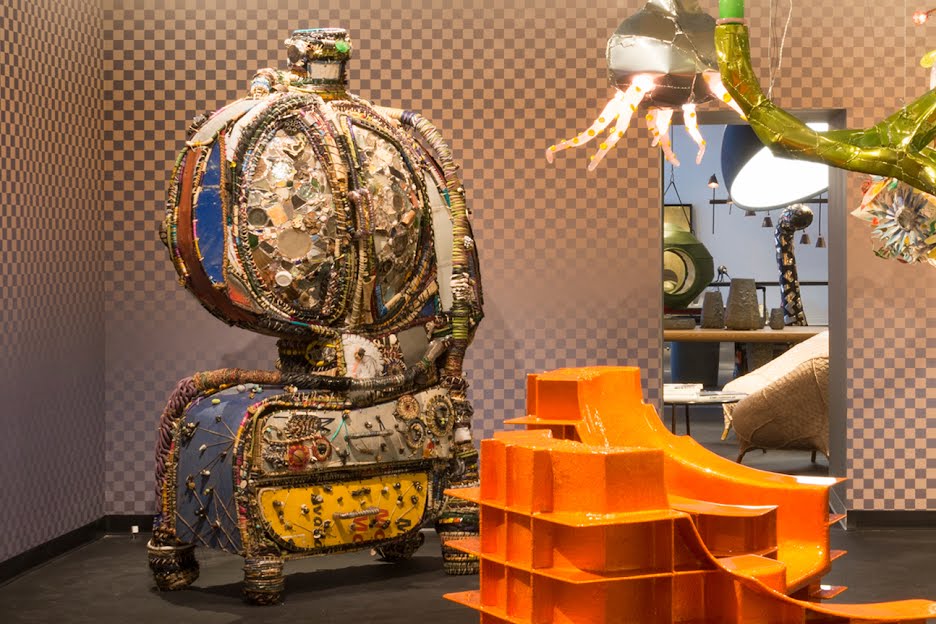 Made from trash and woven grass, Misha Kahn’s Scrappy Cabinet stood out at the 2016 Art Basel Miami fair in December.

Three Furniture Design alumni, Misha Kahn 11 FD, Katie Stout 12 FD and Jamie Wolfond 13 FD, have made Forbes magazine’s 2017 list of 30 Under 30 talented young artists and designers—people whom the business magazine applaud for “creating and designing a beautiful future.” In the past six years a total of 27 RISD alumni have been included in the magazine’s top picks in the Art & Style category.

Based in Brooklyn, Kahn has been called the “wunderkind of furniture” in The New York Times. He continues to express his interesting vision of the world through 3D objects that are eccentric, beautiful and often over-the-top both formally and in terms of materials.

In a similar vein, Stout—who has shared a studio with Kahn and won Ellen’s Design Challenge in 2015—is known for pushing the boundaries of traditional construction through wonderfully playful chairs, rugs and lamps with a personality all their own. She works to “encourage people to invite the slightly deranged, ugly and demented into their lives through usable objects.”

The year after he graduated, Wolfond founded the Brooklyn-based company Good Thing, which works with a small team of designers to create “useful tools that are more thoughtful, better looking and longer-lasting than their existing counterparts.” He believes that the relationships between designers, manufacturers and consumers need to constantly evolve.

In moving its CE classes online, RISD opens the floodgates to passionate new students from across the US and around the globe.