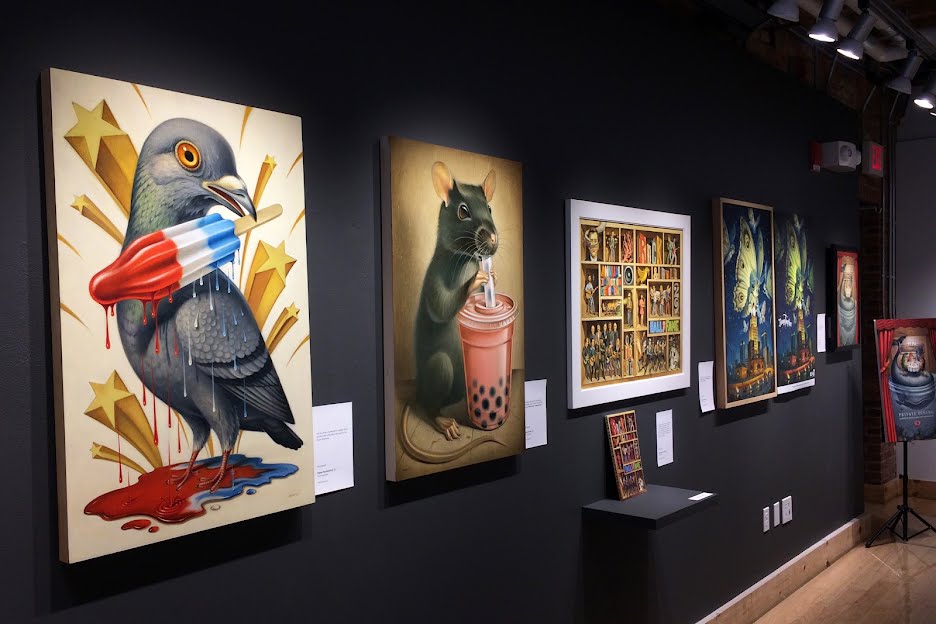 The ISB Gallery is again hosting an eye-opening view into the wide world of illustration through an engaging exhibition that continues through October 18.

Art Direction and Illustration: The Creative Marriage of Words and Images showcases selected works emanating from the creative partnership between Chris Buzelli 95 IL and SooJin Buzelli 96 IL, who met at RISD and subsequently married.

In the past two decades, Chris has developed a freelance practice as an award-winning conceptual illustrator (who also commutes from NYC to teach at RISD), while SooJin has honed a career as a successful art director, commissioning hundreds of editorial illustrations every year.

“Chris and I have been collaborating for 23 years—pretty much nonstop since we graduated,” SooJin says. “We’ve been in many shows together, but this is the first one featuring our collaboration.”

Since opening in late August, Creative Marriage has attracted a steady stream of students and other visitors interested in better understanding what goes into creating illustrative work on assignment—in the larger world beyond RISD.

The exhibition presents a wonderful selection of commissioned portraits and surrealistic paintings Chris has made in his East Village studio while working with art directors at The New York Times, Rolling Stone, Smithsonian, NPR, Macy’s and Penguin/Random House, among others.

The published pieces are tacked up next to the original paintings, along with sketches and informal explanatory notes that help viewers get a sense of the process behind the most fruitful creative partnerships.

“Great illustrations are not accidental,” the Buzellis write in emphasizing the symbiotic relationship between the best art directors and illustrators.

“Published designs go through a behind-the-scenes journey—from brainstorming concepts, tinkering with loose sketches and initial art direction to the dialogue that informs the illustrator’s final drawing and painting choices.”

The Buzellis will speak about their work at an artists’ talk open to the public on Thursday, October 10 at 6:30 pm.