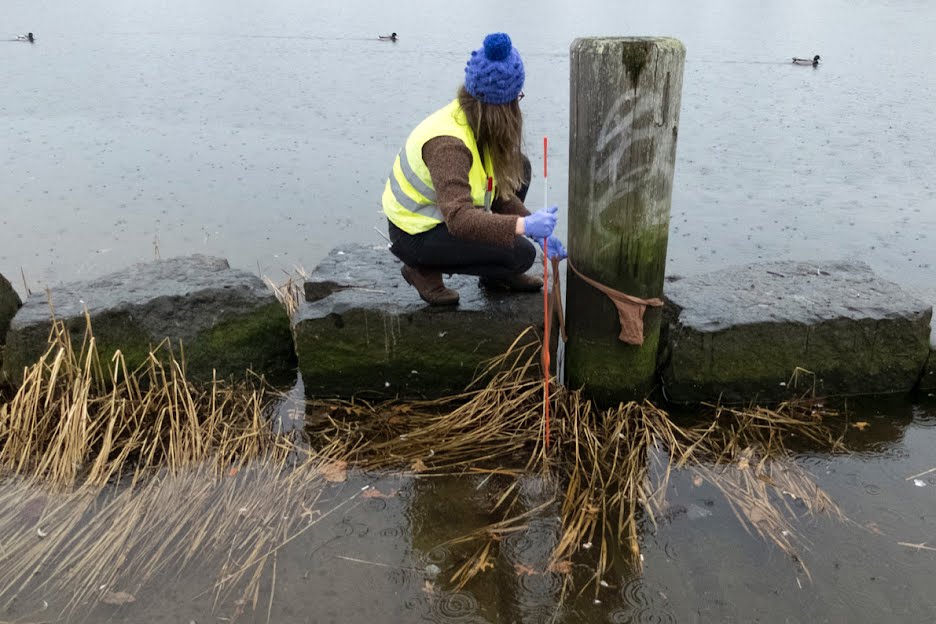 EVERY YEAR 8 MILLION TONS OF PLASTIC land in our oceans—triggering disastrous consequences for marine wildlife.

“No matter how we dispose of it, most plastic ends up in bacteria-rich ecosystems like oceans, landfills and roadside ditches,” industrial designer Megan Valanidas MID 18 explains. “Accidentally dropping a Big Gulp cup or a lighter wouldn’t be such a problem if they were made with materials meant to degrade in the environment.”

Building on work she began as a grad student at RISD, Valanidas is using bacteria-centered design to develop bioplastics that will break down over time, whether they’re recycled, tossed out the window or trucked to a landfill.

Her work in the field is currently on view in PLASTIC, an international exhibition that opened at Trinity College Dublin last fall and is traveling throughout Ireland—from Drogheda to Wexford to Galway, Limerick and Letterkenny—during the course of 2020.

The work is also on view in Design & Science, which opened at Eastern Michigan University (EMU) last fall and is now on view through March 28 at the Science Center in Philadelphia. Curated by EMU Graphic Design Professor Leslie Atzmon, the show explores how science and design come together through biodesign, data manifestation and visual metaphors.

“In creating my contributions [to these exhibitions], I focused on soil as the end user,” Valanidas says, “designing objects that will be attractive to bacterial decomposers.”

Among the concept models Valanidas created for the two concurrent exhibitions are bubble wrap, a giant slurpee cup and a potato chip bag—all objects commonly found in the trash. She was able to make the bag and the wrap in her home studio using traditional techniques like casting and wax forming, but the 3D cup was a bit more complicated.

Its design uses biomimetic textures based on an orange peel to both create more surface area for accelerated decomposition and provide users with a tactile signal that the cup is biodegradable.

“The second layer of information I’m embedding in the design is the human-centered angle—making it clear to people that the material is meant to be composted,” Valanidas explains.

Once she realized that she’d need access to a 3D printer and supporting software to produce the cup, she reached out to classmate Biniam (Bini) Kebede MID 18, who is now a software product designer at GrabCAD in Cambridge, MA.

“The model that Bini printed was better than I could have hoped,” she says. “I’m so fortunate to have these RISD connections.”

Valanidas is accustomed to collaborating with others—particularly scientists, whose work she’s able to “sift through” in search of elements that support her practice. In fact, she was raised in Scientists’ Cliffs, a community founded in the 1940s by pathologists studying the American chestnut tree blight around the Chesapeake Bay in Maryland.

“The original log cabins were built from trees that fell during the blight,” Valanidas explains—because the scientists studying the disease couldn’t stand to see the wood go to waste. “It’s almost embarrassing how much that experience has defined my trajectory,” she adds.

And like her parents, Valanidas is committed to teaching, too. As a design fellow at NuVu in Massachusetts, she’s using a studio education model in working with students in Camden, ME.

“High school students don’t get a lot of opportunities to think creatively,” Valanidas says. “It’s such a pleasure to be able to share my ideas with them and open their minds to open-ended solutions.”

Alumni Michael Lye and Daniel Leeb formed the core of a recent expedition to advance space research here on Earth.

Work by Industrial Design alums and faculty engaging with the natural world is featured in the Cooper Hewitt’s design triennial.