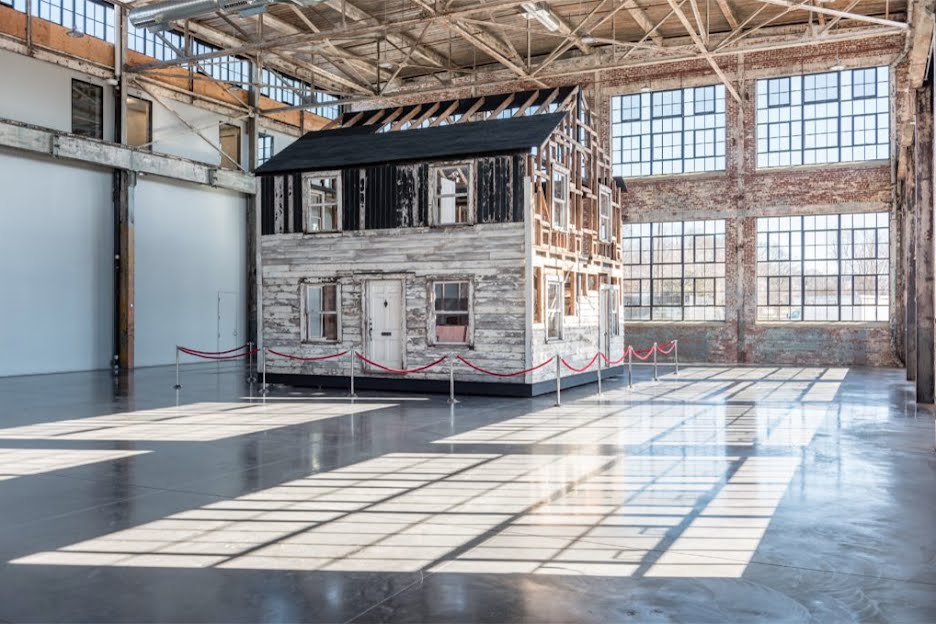 Ryan Mendoza’s Rosa Parks House Project was on view in Providence’s WaterFire Arts Center in 2018 before traveling to Europe.

After Civil Rights activist Rosa Parks sparked the legendary 1955 Montgomery Bus Boycott in Alabama, she responded to death threats by moving north to Detroit, MI to live with her brother. Decades later, artist Ryan Mendoza purchased the house in which the family once lived, rescuing the derelict structure from demolition and turning it into the Rosa Parks House Project, a traveling art installation celebrating Parks’ life. Students in a graduate Interior Architecture class called Theory of Adaptive Reuse devoted their final session in early December to conducting a mock trial focused on whether or not the house should be returned to the US and granted National Historic Landmark status.

The house is on view through the end of December at the Naples Royal Palace in Italy, after which its fate is unclear. Preservation experts disagree about whether it would serve as an appropriate monument to Parks given that she only lived in it for two years and that its structure has been disassembled and reassembled so many times.

After a general introduction by Saira Nepomuceno MA 21, Song Gan BArch 21 and Demi Okunfulure MA 21 debated the significance of the fact that Parks never owned the house on Deacon Street. Gan argued that Parks’ home in Alabama would serve as a more meaningful memorial, while Okunfulure insisted that family memories, not ownership, define a home. Okunfulure won the argument, but guest juror Jacqueline Taylor—an urban design professional who formerly worked for Detroit’s planning department—suggested that she might have pushed her argument even further by referencing racist housing policies that made it impossible for most African-Americans to purchase homes.

Seongah Kang MDes 22 and Nupoor Maduskar MA 21 faced off over the question of whether the house has more merit as an art installation or a heritage structure. Kang argued on the installation side, referencing 19th-century theorists William Morris and John Ruskin, who posited that structures that had undergone modifications were not appropriate for preservation. Maduskar, on the other hand, described the house as “a symbol of defiance that should be preserved” and noted that by imposing his own narrative on the house, Mendoza had diminished its larger cultural value. The quality of both arguments led to a hung jury.

Next up were Architecture students Enrico Giori BArch 21 and Victoria Liang BArch 21, who tangled over the sticky question of “authenticity.” Giori argued that Parks’ movement from south to north—her journey—could better be described as authentic than this particular house. “I agree,” Liang countered. “We should commemorate all of the houses she occupied!”

The jury had a tough time reaching a verdict but ultimately sided with Liang, who argued that the changing nature of the house makes it consistent with other authentic houses, which also evolve over time. “And the fact that the project has enhanced the conversation and brought to light other activists who also refused to give up their seats on Montgomery buses—a point raised by Enrico—only serves to reinforce her argument,” guest juror and faculty member Elizabeth Debs noted.

The last question up for debate was whether or not the house should be returned to its country of origin and designated a national landmark. On the pro side, Caroline Lippincott MArch 22 described Parks’ tenure in the house as a turning point in her life and the house itself as the perfect metaphor for the racial injustices she fought against. “The house has done its job raising awareness around the world, but now it’s time for it to come home to Detroit,” she said.

But her opponent, Sofia Paez Zuniga MA 21, reminded “the court” that social injustices are rampant around the world and that the Black Lives Matter movement is global. Again, the jury struggled to make a decision before siding with Lippincott. Guest juror Erika Lindsay—who teaches architectural preservation at University of Detroit Mercy—particularly appreciated her argument that the house is a part of American history and belongs in the US.

An ambitious symposium considers how the bones of a ruined house can spark dialogue about memory, preservation and institutionalized racism.

Redefining the Meaning of Monuments