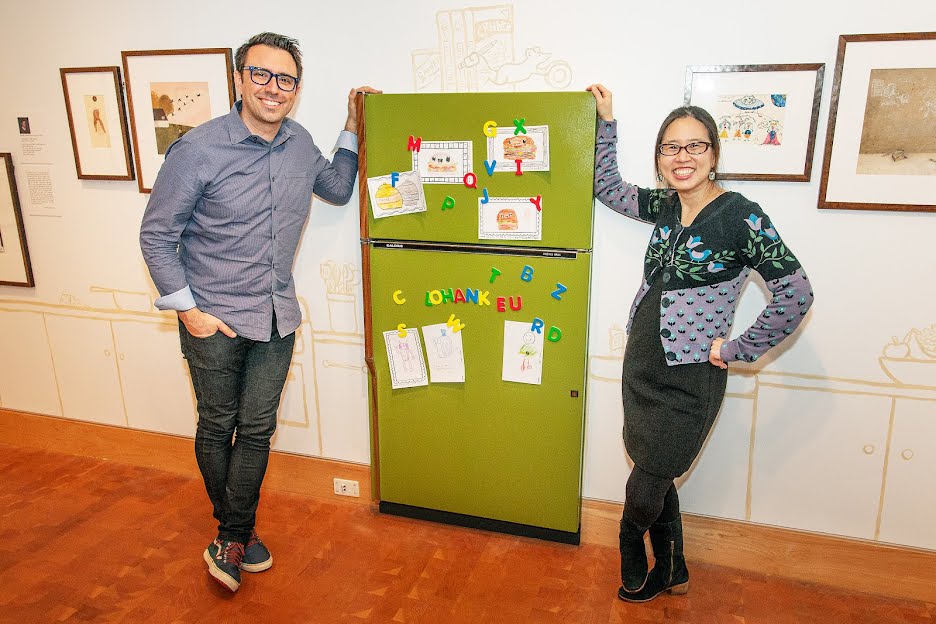 Krosoczka and Lin helped design an exhibition space reminiscent of a 1980s kitchen, inviting young visitors to the Eric Carle Museum to make and post their own drawings.

Author/illustrators Jarrett J. Krosoczka 99 IL and Grace Lin 96 IL have a lot in common. Not only did they earn Bachelor of Fine Arts degrees in Illustration at RISD in the late 1990s, they’ve both produced multiple award-winning children’s books—and they both now live in the same small town in western Massachusetts.

Now the accomplished storytellers have teamed up to co-curate an inspiring exhibition at The Eric Carle Museum of Picture Book Art in Amherst, MA. On view through May 10, Now & Then: Contemporary Illustrators and their Childhood Art pairs their own recent work and that of 17 other celebrated artists with pictures they drew as kids.

“Every artist has their own journey to travel, and there is no way to know where the path will go,” the curators note. “But by connecting these childhood works to those made in adulthood, we hope to show young artists what is possible and what could be just beyond the horizon.”

“It’s amazing,” Krosoczka adds, “because looking at [each] piece, you see that thread of who the artist became right there in their early work.” His own contribution to the show—comics he made as a fifth grader—clearly foreshadow the campy vibe of his enormously popular Lunch Lady graphic novels, which are also on display in the gallery.

Krosoczka and Lin both got a lot of encouragement at home when they were kids and remember posting their favorite drawings on the refrigerator door.

So they worked with Carle Museum Chief Curator Ellen Keiter to design a space reminiscent of a 1980s kitchen, where young visitors can make and post their own drawings.

The artists invited to participate work in a range of mediums—from graphite to collage to watercolors—and represent an assortment of backgrounds: African-American, Latino, Cree-Metis, white, Asian-American and LGBTQ.

“We wanted to make this show as diverse as possible,” says Krosoczka. “We want kids from different backgrounds to come in here and see someone who looks like them.”

Mora’s contribution from the past is a childhood drawing of her family that highlights her “chocolate milk” skin tone, a feature that made her feel special as a first grader.

And the inviting cut-paper collages from Thank You, Omu! shown alongside it also celebrate racial diversity, depicting friends with a variety of skin tones enjoying the grandmother’s stew.

“I am still passionate about celebrating personal narratives and skin of all shades,” writes Mora in her exhibition statement. “Every child should delight in their differences.”

Growing up Taiwanese-American, Lin was acutely aware of the absence of Asian faces in her upstate New York community and in her favorite books. She hopes that Now & Then “will inspire the next generation of artists and that kids of all backgrounds who like to make art will come here and say, ‘I can do this, too.’”