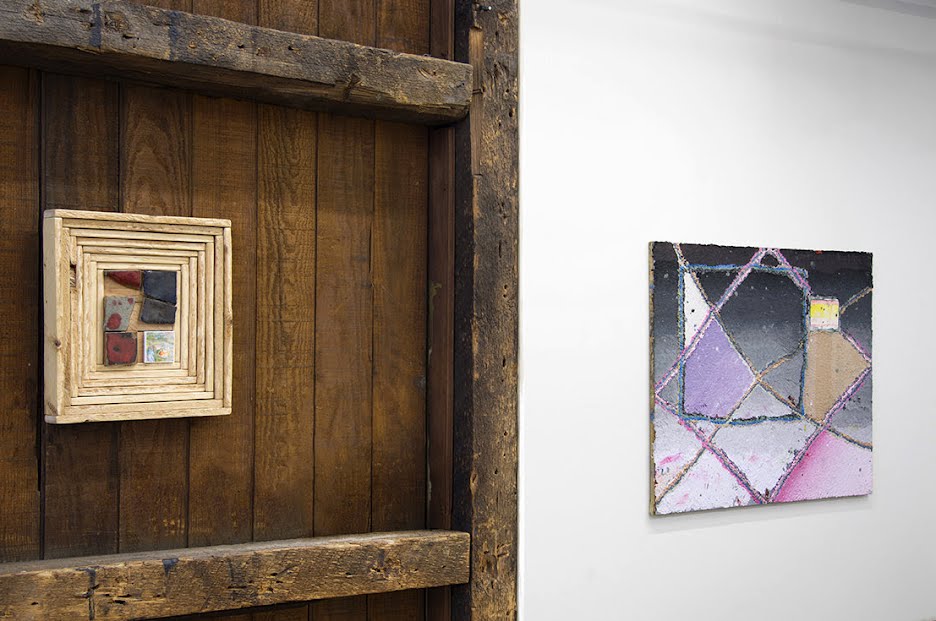 A two-person exhibition on view at Safe Gallery in Brooklyn picks up on the original intention behind the space—“to pair emerging artists in direct dialogue,” as the gallery’s founder Pali Kashi 01 PT puts it.

But the show that opened in mid May—called simply Maddy Parrasch & Emma Soucek—also does much more: It presents an unsentimental exhibition focused on two emerging artists—both RISD Painting majors, like Kashi—in a very direct and buoyant dialogue interrupted by tragedy. When Maddy Parrasch 19 PT died in a car accident last December—just six months shy of when she would have graduated from RISD—a wonderfully fruitful creative conversation she’d been having with Emma Soucek 18 PT came to a sudden halt.

The two friends were so tight that they “did in fact finish one another’s sentences,” writes Associate Professor and Department Head Kevin Zucker 00 PT in introducing the show.

“But that phrase trivializes one of the best art romances I’ve seen firsthand: they also finished one another’s paintings and started one another’s thoughts.... They traveled together, borrowed from one another and from the rest of their extraordinary group of friends, and shared pretty much everything, pooling experiences to maximize returns. The last time they were physically together, they interviewed one another.”

In wrestling with how best to merge images with materials, Parrasch’s work shows her experimentation with monoprints, glazed ceramics and 3D and UV printing. In one signature piece, she places bits of gypsum printed with found photographs into an intricate composition of 306 ceramic tiles.

“A lightning bolt, a pair of fighter jets, a detail of a painting by Giotto,” writes Will Heinrich in a recent New York Times review. “It’s a very contemporary way of treating photographic imagery—as unimportant background noise, mainly good for decorative accents.”

Similarly, Soucek considers photos in much the same way—as part of a constellation of bits of drawings, scraps cut from magazines and even a laminated piece of Parrasch’s ceramic—to create abstract compositions of paper pulp on canvas.

“Though they’re hyperactive with bright, textile-influenced patterns, these pieces by Ms. Soucek also share Ms. Parrasch’s version of a Japanese wabi-sabi aesthetic,” Heinrich writes. “Every pinched bit of pulp is a clear record of Ms. Soucek’s fingers, which puts process on a par with product, and gives equal time to accident, to intention and to the materials.”

Together, the works suggest that both memory and preservation are “fragile, flowing, brittle—and always in flux,” Zucker points out. After starting out as an archaeology major, Parrasch continued to be intrigued by notions of excavation, describing her works as “clues to trace a broken train of thought.”

“Anyone could be forgiven for wanting to turn this show into an elegy,” Zucker observes, “but that’s not the work’s mode: there’s no one narrative, and certainly no summation.

Yes, this show connects us to a heartbreaking story about two young artist-friends who loved and contributed profoundly to one another’s work, but the vigor, exuberance and emotional range of the actual objects in the gallery demand we not be satisfied with that conclusion, or any other. Please, look.”

Maddy Parrasch & Emma Soucek has been extended through Sunday, July 14 at Safe Gallery in Brooklyn.