Students in a fall Landscape Architecture studio collaborate with residents of Fall River, MA on interventions for revitalizing the city’s downtown. 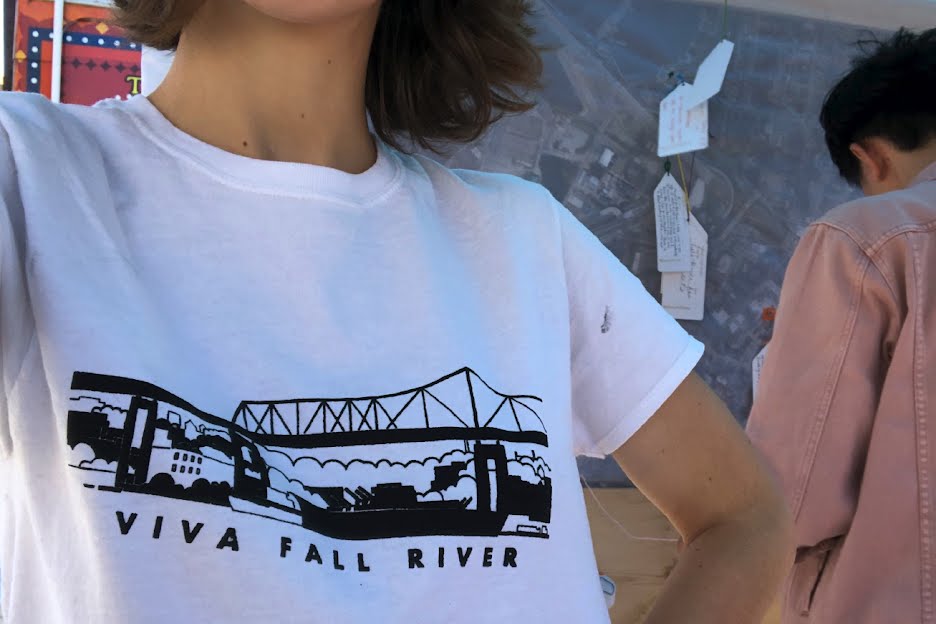 Members of the Fall River community welcomed these student-designed t-shirts celebrating their city.

“No amount of online research can substitute for what you learn from talking to the people you are designing for,” says Cornelia Overton MLA 20.

One of a dozen undergraduate and graduate students in a Landscape Architecture studio called POP-UP: Activating the Civic Commons through Participatory Design, she relished the opportunity to collaborate with residents of Fall River, MA on strategies for breathing new life into the postindustrial city’s disconnected downtown.

“Design is a political act that can either reinforce or alter social, institutional, economic and ideological power structures,” says Assistant Professor Emily Vogler, who developed and led the course.

Students in the course deconstructed the traditional designer-client relationship and introduced new ways for community members to share their vision for the future of their city—an opportunity fifth-year Architecture student Sophie Chien BArch 20 describes as “incredibly rewarding and all too rare in my experience.”

As Vogler goes on to explain, “The objective was to expand the way students think about design to focus not exclusively on landscape or object but rather on designing the process of community engagement itself.”

Students partnered with MassDevelopment, a government-run finance and development agency, and the arts organization Youth Experiencing Art and Hope (YEAH, led by RISD alum Tom Flint MA 18) to develop proposals for small-scale interventions that would help activate the public realm.

During the first half of the course, students designed outreach materials for gathering community input at such events as the recently introduced FABRIC Arts Festival and Kids-a-Palooza.

“This is the first time we’ve worked with RISD students,” says MassDevelopment Transformative Development Initiative Fellow James McKeag. “Their approach as designers (versus urban planners) was incredibly creative and thoughtful, and really appealed to the community.”

Residents took part in such activities as silkscreening shirts using student-designed prints and sharing memories and ideas via an interactive map of downtown. One of the student groups worked with community partner Charlie Merrow and employees of his textiles factory Merrow Manufacturing via a design charrette utilizing outreach materials in English, Portuguese and Spanish.

“Charlie was a great fit for this project,” says McKeag. “He is looking for creative ways to make his site more friendly for his employees and for pedestrians.”

And Chien, who was part of the team that worked with Merrow, really appreciates that he plans to use “his own resources to revitalize Fall River.”

The second phase of the studio allowed students to take what they learned in phase 1 and develop their own long-term vision for the city along with short-term “tactical urbanism” strategies.

At final crits on December 10, Vogler explained that the term specifically refers to how students might bring their vision to life.

She proposed a walkable green loop that would bridge the gaps and make use of underutilized outdoor spaces via creative programming, such as an outdoor market and storytelling circles outside the public library.

Grad student Xue Gao MLA 20 focused on the community’s children, envisioning a cyber treasure hunt app (similar to Pokémon GO) that would encourage kids and their parents to explore newly refurbished green spaces in search of the Braga monster—a mascot of sorts she created based on Fall River’s landmark Braga Bridge.

“I think adults would love the Braga monster, too,” McKeag noted at the crit. “And I really like the urban oases you’ve proposed pairing colorful, pixelated murals and planter gardens featuring a nice selection of species.”

They proposed multiple waterfall murals reminding citizens of the city’s history and a walking trail following the river’s underground path and building off the existing Quequechan River Rail Trail.

“I think it’s a fantastic reading of the site,” said visiting critic and landscape architect Claire Fellman, “and a great way to build off the existing rail trail, which has already been a win for Fall River.”

Dean of Architecture + Design Scheri Fultineer suggested that the experience might be made richer via an aural component such as the sound of rushing water.

McKeag appreciates the many affordable but high-impact interventions proposed at the final crit and said he hopes his office will be able to pilot some of them in 2020.

“I’m really proud of the work the students did this semester,” says Vogler. “They brought all their creativity to designing the public engagement process and thinking about how to help catalyze change in Fall River.”

Five affordable, net-zero homes designed in a RISD studio are being built in Providence’s Olneyville neighborhood.