A World without America 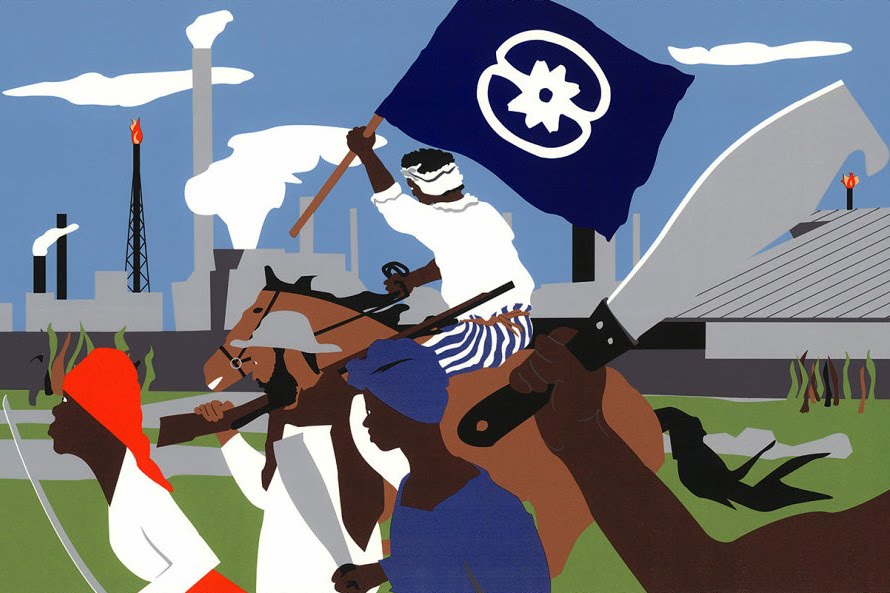 In making this recent print—called Revolt—visiting artist Dread Scott looked to both the work of painter Jacob Lawrence and the 1811 slave uprising in Louisiana.

At a February 27 talk at RISD called Imagine a World without America—the most recent in the graduate speaker series The Gradual Contemporary: Conversations on Contemporary Art—he repeated that phrase as a kind of mantra, allowing its meaning to sink in.

The internationally recognized maverick is not exaggerating his own role—or that of other artists—in shaping history. Scott’s audacious questioning of the status quo first captured global attention in 1989, when he was still a student at the School of the Art Institute of Chicago (SAIC).

When SAIC exhibited Scott’s piece What is the Proper Way to Display a US Flag?—an interactive installation featuring the American flag laid out on the floor, where viewers could stand on it or not as they saw fit—then President George H.W. Bush denounced it as “disgraceful” and the US Congress agreed, subsequently passing legislation to protect the flag from desecration.

These responses from national politicians also inspired thousands of previously uninterested Chicagoans to line up for hours to see the piece.

“Igniting such a passionate response—in the people who wanted to kill me and the people willing to risk their own safety to protect me—really showed me the power of art,” Scott says.

In the 30-plus years since that auspicious beginning, Scott has continued to doggedly critique “the myth of American democracy” and the country’s harmful influence around the world.

“We owe the recent small but critical shift in institutional and social thought to extraordinary individuals like Dread Scott,” noted Associate Professor Leora Maltz-Leca, department head of Theory + History of Art + Design, in introducing him at the talk.

Earlier in the day, Scott visited studios and offered feedback on the work of several graduate students of color, including ceramist Desun Peoples MFA 21 CR.

As a Fulbright scholar, he had traveled to China to study porcelain and is currently working with clay and 3D-printed forms, focusing on the sphere, which he describes as “perfect, symmetrical across every axis, infinite, demanding, particular and complete.”

Peoples has also found joy in mentoring LGBTQ+ youth and is currently at something of a crossroads in his career as he determines how to express his point of view through his art. Scott appreciates his willingness and ability to articulate the thinking behind his practice and notes that “it can be hard for people to understand the politics of non-abstract work.”

Scott also offered encouragement to Painting grad student Jarrett Key MFA 20 PT, who launched into a fantasy opera in progress inspired by Caribbean mythology, singing all of the parts.

Key explained that they, too, grapple with “anxiety about the state of freedom in the US” and attempt to understand the concept “through three lenses: survival, transformation and celebration.”

Scott celebrates his own freedom by staging acts of resistance as performance pieces, including one of his most recent Slave Rebellion Reenactment.

Last November 500 black people wearing period costumes and armed with cane knives and muskets participated in a two-day march celebrating the largest slave rebellion in history: Louisiana’s German Coast Uprising of 1811. Together they followed the historic 26-mile route, singing Creole songs of revolution and proudly bringing to light what Scott refers to as “buried history.”

The powerful communal experience, Scott explains, is not just about honoring courageous acts of the past but also about considering how history repeats itself and how oppression takes on new forms over time.

Scott’s 2015 piece, A Man Was Lynched by Police Yesterday, for example, honors the NAACP’s 1920–38 anti-lynching campaign during which a flag bearing the words “a man was lynched yesterday” was flown at the association’s NYC headquarters every time another lynching took place. At the same time, it decries the fate of contemporary black citizens, who are seven times more likely to be killed by police than their white counterparts.

Does Scott think that America can overcome racism and xenophobia—that there’s hope for the future of the US?

“This country was founded on slavery and genocide, and those ideas shaped our Constitution,” he says. Although he’s encouraged by grassroots campaigns like the prison abolitionist movement, he essentially believes that the system isn’t worth saving—that we need to dream bigger and “imagine a world without America.”