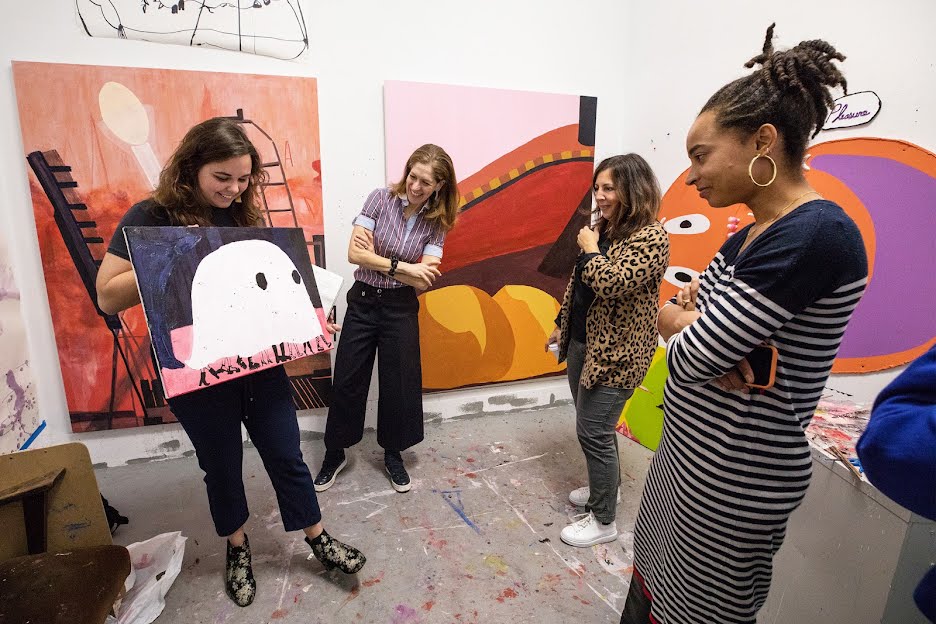 “There’s nothing to be gained from policing yourself in the studio,” says Rujeko Hockley, an assistant curator at the Whitney Museum of American Art. “People will always bring their own experiences to your work, so the best thing you can do as an artist is to follow your instincts.”

Hockley and her colleague Jane Panetta—who co-curated the 2019 Whitney Biennial—were on campus viewing work in progress by first-year grad students in a class taught by Associate Professor Leora Maltz-Leca, head of the Theory and History of Art and Design department.

On Thursday, November 14, the down-to-earth duo presented the first lecture in The Gradual Contemporary, a graduate seminar that brings a range of notable artists, art historians and critics to RISD each year to share their varied views of the contemporary art world.

Hockley and Panetta focused on process during their talk—how they turned hundreds of studio visits spanning the US into a cohesive, multidisciplinary exhibition featuring the work of 75 cutting-edge artists.

The very notion of what constitutes an American artist is changing, they noted, and they were eager to include “outsider art” that surfaces through unconventional sources. In making selections for the biennial (which closed in October after a five-month run), “We also tried to move outside the East Coast and West Coast corridors,” Panetta noted.

They carefully considered the audience for the exhibition as well, creating a show that spoke as directly to visitors who rarely set foot in museums (like Hockley’s grandmother) as it did to Whitney regulars. Panetta noted that when the museum moved down to lower Manhattan in 2015, the number of annual visitors shot up from about 250,000 to more than a million—many of whom had never visited a museum before.

Students at the talk were eager to get the inside scoop about the political controversy that erupted during the biennial—surrounding Whitney board member Warren Kanders, who ultimately resigned in July under enormous pressure from artist/activists.

RISD alumna Nicole Eisenman 87 PT, for example, referenced the fortune Kanders made manufacturing tear gas in her brilliant outdoor installation Procession, which included a central figure that expelled a cloud of gas out of its keister every three minutes.

“We were committed to maintaining the integrity of the exhibition,” Panetta says, “and we gave the artists included in the show the opportunity to present different work in light of the situation. But the controversy erupted [late last fall], so it was too late for most to make changes [before the exhibition opened in May].”

During their studio visits at RISD, Panetta and Hockley seemed to be as thoughtful and generous in their critique of student work as they would be in a professional setting.

They encouraged Nicole Schonitzer MFA 21 PT to continue experimenting in black and white and playing with ambiguous scale. And they advised Rebecca Senn MFA 21 PT to stick to her multidisciplinary approach and her penchant for incorporating humor in her work, which Hockley described as “a great way to approach more serious issues.”

“I like the way you’ve framed and compressed the imagery in these pieces,” Panetta told Aparna Sarkar MFA 21 PT. “You seem to be describing their graphic quality as a limitation, but I see it as a useful tool.”