Paula Gaetano-Adi is an artist, educator and researcher working in sculpture, performance, interactive installations and robotic agents. With a particular focus in different performative modes of art making, her work is an attempt to promote bodily interspecies/intercultural live encounters and explore the effects and affects of different discourses in techno-science.

Gaetano-Adi obtained a degree in Audiovisual Communication from Universidad Blas Pascal in Argentina and an MFA with emphasis in Art & Technology from The Ohio State University. She was visiting scholar at the UCLA REMAP, University of California Los Angeles, and artist-in-residence at Sachaqa Eco Art Center (Perú). She has served as a faculty for the Electronics Arts program at the Tres de Febrero National University in Buenos Aires and the Rensselaer Polytechnic Institute in Troy, NY, and she directed the undergraduate and graduate program in New Media Art at the University of North Texas. She currently teaches in Experimental and Foundation Studies at RISD. 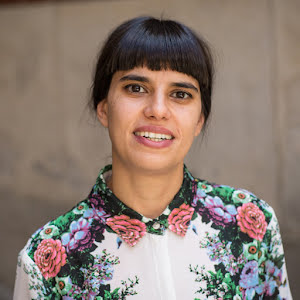