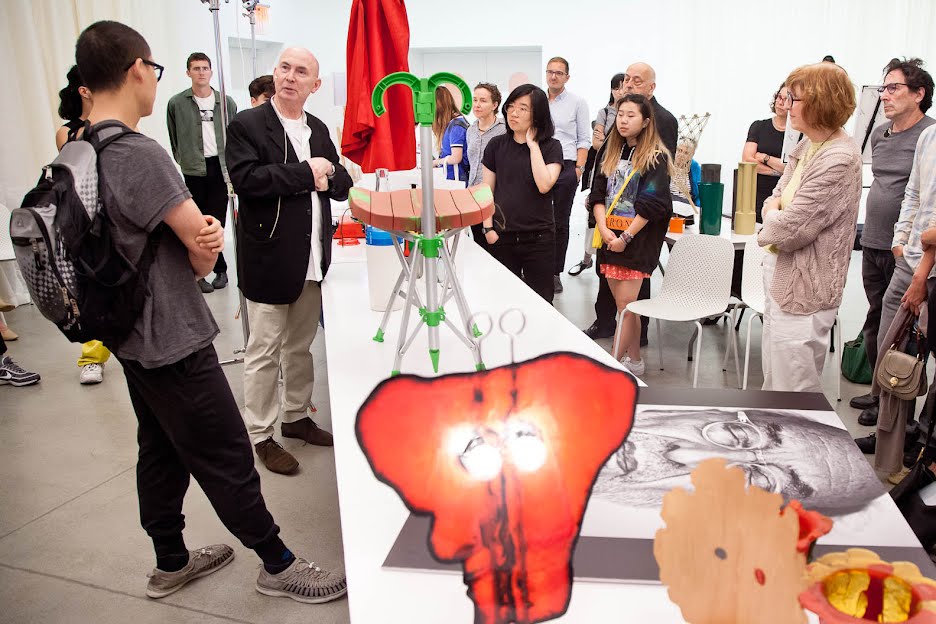 Murray Moss first challenged public perception of contemporary design in 1994 when he began selling hand-selected objects at his upscale shop in NYC.

“I’d never seen work choreographed in quite the same way,” President Rosanne Somerson recalls. “MOSS changed people’s perspectives and began an incredible conversation about the future of design, launching many careers along the way.”

As the first-ever senior presidential advisors at RISD, Moss and his longtime partner Franklin Getchell hosted an “interactive runway exhibition” on campus on Saturday, September 28.

The two presented a selection of groundbreaking pieces from their collection with the intention of “challenging the familiar, reconceptualizing the ordinary and inspiring future game changers at RISD.”

At the informal gathering, students, faculty, staff and others closely examined the objects on display, watched short films of the designers at work and soaked up personal anecdotes about the people behind the work.

Moss pointed out that the designers he considers game-changers have the ability to look at a singular aspect of the world from a completely new angle and permanently transform our shared cultural perspective in some way.

Consider the late graphic-designer-turned-magazine-editor Tibor Kalman, perhaps best known for imagining the queen of England as a black woman.

“Tibor saw graphic design as a means, not an end,” Moss recalls, “and he was always searching for inspiration.” The game-changing perspective he offered is: good designers make trouble.

And although Moss made a point of bringing American designers into the conversation 25 years ago, many of the works he shared at RISD were created by great European designers: Italian “poet of light” Ingo Maurer, who used early LED technology to stoke the world’s emotions; Slovakian-born Tomáš Gabzdil Libertíny, who harnessed the expertise of 40,000 hardworking bees to create his incredible honeycomb vases; and the great Milanese modernist Enzo Mari, who turned a simple iron I-beam into a sought-after fruit bowl.

Since many of these mindboggling conceptual objects were impossible to bring to market, Moss curated a show at MOSS that was devoid of things to buy—including Droog designs like the Knotted Chair, which combines traditional techniques and modern materials like resin-dipped rope.

“It marked the beginning of the Dutch design craze,” he says of the show—while Getchell adds dryly: “It also explains why I had to step in as his business partner.”

Curating a Retro-Futuristic Show at MAD

Alumna Kellie Riggs 11 JM curates a retro-futuristic jewelry exhibition at the Museum of Arts and Design in NYC.