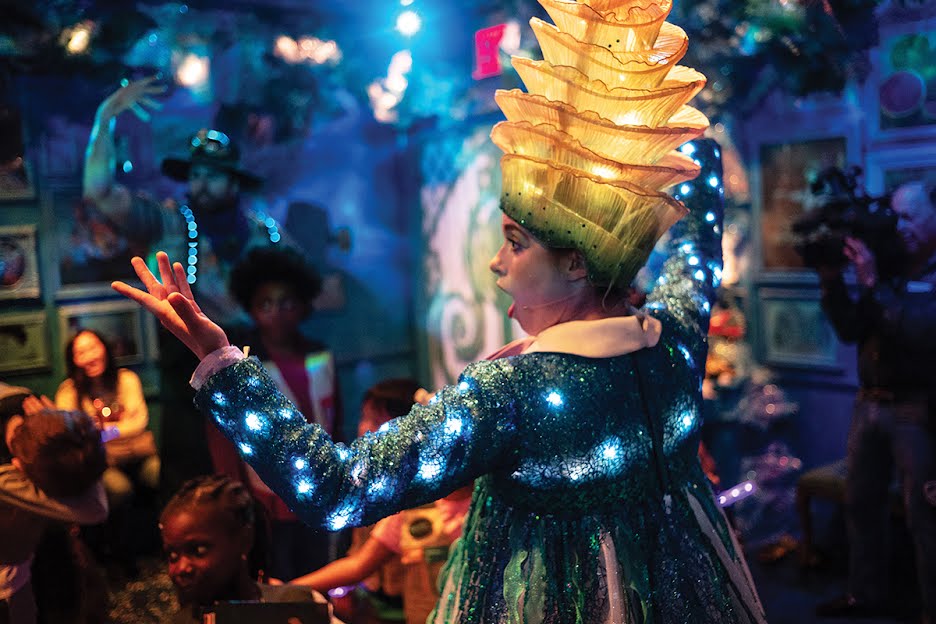 A scene from the interactive off-Broadway production Pip’s Island

By the time she came to RISD in 2008, Kelly C. Knapp MLA 10 had lived in 10 countries, studied international affairs and sculpture, and taught with the experiential learning organization Outward Bound.

As a Landscape Architecture student, she made time for multiple printmaking studios before completing a master’s thesis that touched on quantum physics, phenomenology and metaphysics. And since graduating just after the most recent economic meltdown, she has struggled a lot while working in a variety of design fields.

“Someday,” Knapp says, “I would love to live like James Turrell and further explore light, space and consciousness.” But that’s for later. Right now she is laser-focused on building a career in experience design, drawing from her eclectic skillset to create immersive environments for a variety of clients.

“I go to the gym, I go to work and then I lie in bed with my laptop before going to sleep,” admits the (now mostly) NYC-based designer.

“But I absolutely love what I do. The energy I get from experience design powers me through no matter how tired I am.”

In the past few years Knapp has completed projects for Bergdorf Goodman, Chanel, CNBC and Affordable Art Fair NYC, among others. And although she’s not blind to its commercial motives, she finds sparks of joy in experience design. “I want my work to help create a sense of community through shared experience,” she says.

In 2018 and 2019, Knapp also worked intensively on Pip’s Island, an off-Broadway production for kids that opened last May and has since gotten favorable reviews in The New York Times, Forbes and The Wall Street Journal.

As the production designer and art director, she worked with the creative team and consultants to create nine immersive spaces in a 15,000-sf performance space in midtown Manhattan, where kids problem-solve together to come to the rescue in an interactive fantasy tale.

Among the hurdles of building a production from the ground up, Knapp says the most formidable was also the most fundamental. “When there are millions of dollars involved, the hardest thing is to convey an idea to people who don’t share your expertise and give them a solid rationale for why it’s the right decision.”

Despite some of the other challenges—from 95-degree days working in a small Brooklyn studio to a lot of travel between NYC and Providence, where she also lives—Knapp is pleased with the outcome.

“It was an enormous project and I’m proud of the work I did,” she says. “And after we opened, the directors called me to explore new opportunities.”

In establishing expertise as an experience designer, Knapp draws on what she learned at RISD to articulate big ideas to a wide range of clients while also employing the nuts-and-bolts of building physical spaces—the things she admits eventually turned her off architecture.

“[Drafting] construction documents and all that detailing was torturous for me,” she says. “But what I love about experience design is that I can take my knowledge of that and express it in a way that really excites me.”

Looking back Knapp values the rigorous and intellectually rewarding academic experience at RISD, where she really connected with both the conceptual focus and the entrepreneurial ethos of the architecture programs. “RISD instilled a sense in me that if I don’t immediately know how to solve a problem, I do have a method for figuring it out,” she says.

She also appreciates that Professor Lili Hermann—one of her mentors in Landscape Architecture—is “to this day one of my biggest cheerleaders. She saw things in me that I didn’t see in myself.”

But Knapp is less happy about the challenges she faced after earning her degree—especially the financial and emotional cost of living with serious student debt.

“I started my program [in 2008] right as the economy started to melt down,” she explains. “My loans were sold 12 times while I was in school”—which led to a disturbing doubling of her debt in the decade since. “So besides loving what I do, my biggest motivation is clearing out that debt.”

“Now I want to help current students however I can,” says Knapp, who occasionally serves as a guest critic in Landscape Architecture and helps lead an Apparel Design workshop in RISD’s Pre-College program.

“You don’t have to be a struggling artist,” she advises others. “You can make props and build sets with film crews or design immersive retail displays. There’s a whole other world of opportunities out there to create and make connections.”