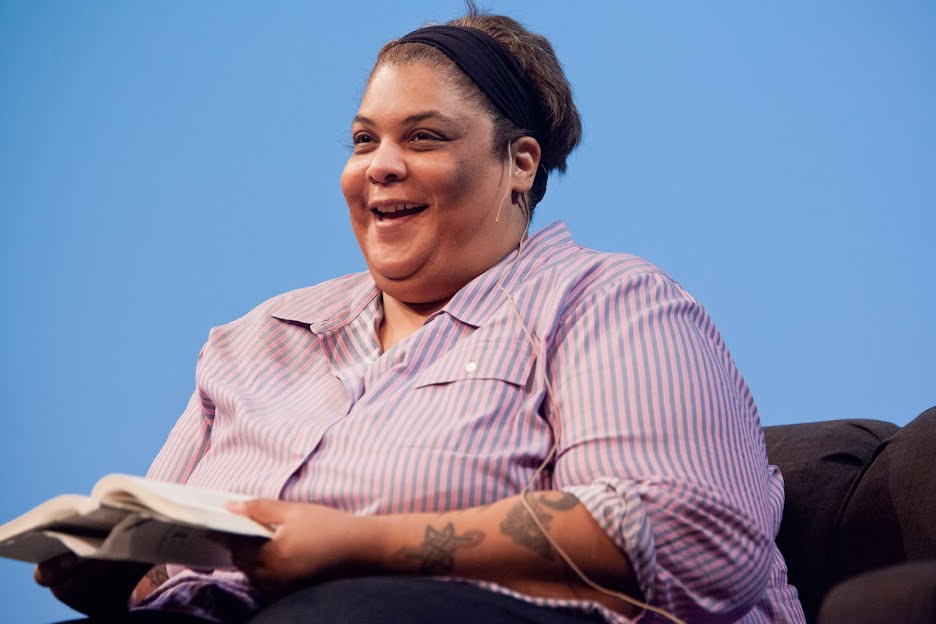 On Friday, March 2, writer/activist Roxane Gay, the final speaker in RISD’s 2017–18 Martin Luther King, Jr. Series, read from her powerful 2017 memoir Hunger and shared with students her wisdom, grace and joy. “People want to consume the sob stories of the underrepresented,” she said, “and it’s easy to become attached to victim narratives. But we actually have choices. Let’s measure our pain with our joy.”

In introducing Gay to the enthusiastic crowd that came to hear her speak, President Rosanne Somerson 76 ID admired her ability to follow Reverend King’s advice and “celebrate her own power.” Event moderator and Interim Dean of Faculty Patricia Barbeito, a professor of American literatures, joined Somerson in praising Gay’s talent for “breaking the silence of the night” and went on to describe her prose as “boundless, fearless and distinctive.”

“I’m here to talk about bodies, not race,” Gay declared moments after taking the stage. “Fat, much like skin color, is something you cannot hide.” When it was time to choose a topic for her most recent book, she explained, the last thing she wanted to write about was fatness. Thus was born her critically acclaimed memoir.

As a girl, Gay was the victim of sexual violence, and she responded to the attack by eating as a way of protecting herself. Decades later she is weary of how inhospitable the world is to fatness and ready to counter and “re-inscribe the narrative people project onto [her] body. People forget that fat people are people,” she added. “They think we are incapable of being happy or self-confident.”

Despite the serious, personal nature of Gay’s talk—or perhaps because of it—her stories were punctuated with laughter and hilarious asides. In discussing her admiration for Food Network star Ina Garten (who taught Gay through her show that “to cook for herself is to care for herself”), she mentioned an episode in which Garten invited to lunch a local construction crew that was rehabbing a nearby windmill. Gay deadpanned the audience for a moment before proclaiming gleefully, “White people! Y’all are too much!”

During the lengthy Q+A session that followed her reading, Gay listened intently to students’ concerns about activism, sexual violence and resilience and then provided thoughtful, honest responses. “Don’t set yourself up for perfection,” she advised one young woman. “You’ll learn from your mistakes.”

In response to a student’s question about turning disagreement into dialogue, Gay said, “It’s hard to recognize the merits of the other person’s argument. Be open to nuance and consider changing your mind.” For her own part, she noted by way of example, one of the things she likes about Zadie Smith’s writing is that she doesn’t always agree with her position.

Another student wondered how she could make a difference as an activist even though she has never been discriminated against. Gay advised her to “listen more than you speak. It’s important to recognize your privilege, but don’t let it silence you.”

Gay also empathized with audience members who were tired of educating their friends and coworkers about difficult issues like racism and substance abuse. “I’ve made peace with the fact that I do have to educate people,” she noted. “But you can also tell people to educate themselves by creating a bibliography for them. That puts the responsibility on them.”

As a black bisexual woman author, Gay has also come to terms with labels. “The older I am, the less eager I am to shed those labels,” she explained. “There’s no shame in the labels. It’s the [narrow] expectations behind them that are the problem.”