Graphic Design sophomores get outside for an embodied lesson in type design. 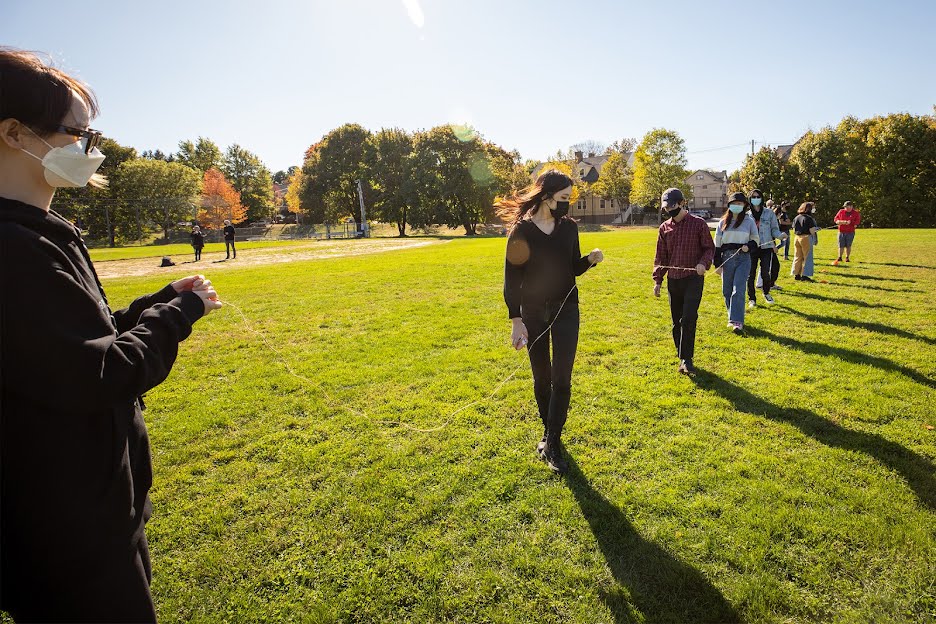 Students use their shadows to create letter forms.

On a picture-perfect autumn afternoon, sophomores in Associate Professor of Graphic Design John Caserta’s Typography I class spread out across a green field near campus, kicking a soccer ball around and peering up at a small drone buzzing overhead. What better way to learn about type design, Caserta asks, than to use your body to create letter forms?

“The three-semester type sequence for Graphic Design undergrads begins with a module called Letterform Construction that asks students to investigate letters as form,” Caserta explains. “Like any form, the shape of the letters is dependent on the tools and materials that construct them. The distinction between lettering (one-off creations) and typography (industrial and mass-produced) is less and less important.”

The group exercise also provided students the opportunity to meet physically while still following protocols around social distancing (after weeks of primarily virtual communication) and to work collaboratively while having fun. The writing implements were the soccer ball and the participants’ shadows, and a video camera attached to the drone—operated by Digital + Media Art & Design Research Technologist Stephen Cooke—captured the letters they created from above. Watching the group at work was not unlike watching a marching band forming shapes on the field for fans up in the bleachers.

The students were all given a diagram for each letter of the alphabet with basic measurements and simple instructions like “everyone in every letter” and “passing the ball is best.” At the end of the exercise they were asked to reflect on the experience and make some letter drawings inspired by it.

“The process of working together as individuals to form something bigger than ourselves is ultimately what a letter is,” says Caserta. “It also makes an exciting classroom dynamic.”

Speculations on the Posthuman Age

Designing for the Future of Mobility