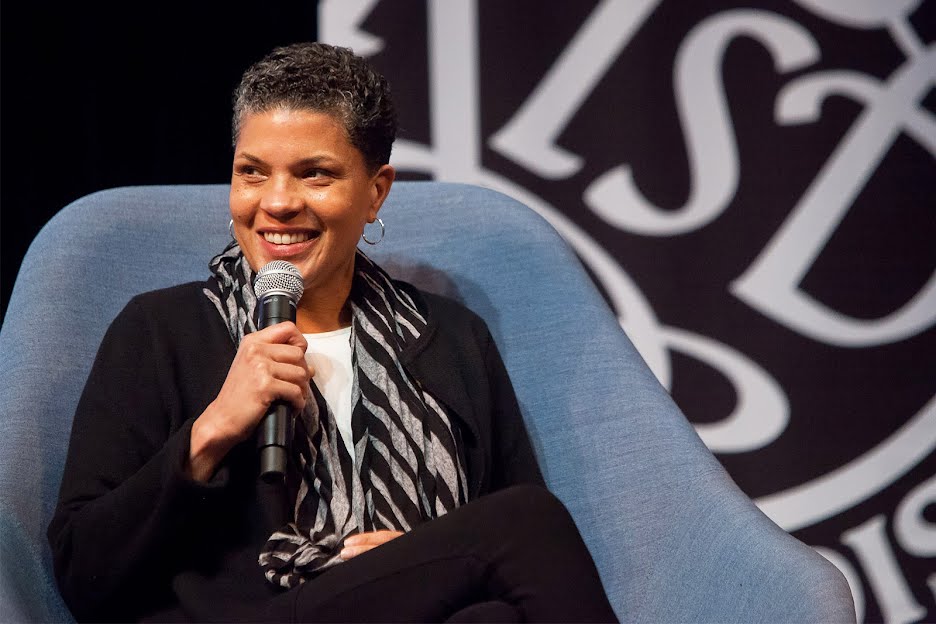 “I hope that in the future we’ll look back on the prison system of today with as much horror and shame as we now feel about barbaric punishments of the past, like chopping the hands off of thieves. If I had to choose between that and 10 years inside a cage, I’d choose to lose the hand.”

Legal scholar and social justice advocate Michelle Alexander wasn’t pulling any punches when she addressed a full house in the RISD Auditorium on January 22 in honor of Dr. Martin Luther King, Jr.’s legacy.

The eloquent author of The New Jim Crow: Mass Incarceration in the Age of Colorblindness (The New Press, 2010)—the definitive text on systemic racism and the mass criminalization of people of color in this country—espouses honesty, self-awareness and social reform.

This year’s community forum—the eighth since RISD launched the MLK Series in 2013—took the form of a conversation led by Associate Provost of Social Equity and Inclusion Matthew Shenoda, whose incisive questions provided a framework for Alexander’s thoughtful responses.

In his introduction, he aptly described her preternatural ability to “peel back the curtain on systemic racism and… reimagine social structures that seem unimaginable.”

Reflecting on King’s 1967 Beyond Vietnam speech condemning global militarism as well as America’s war on drugs a generation later, Alexander connected racially motivated policies of the past with those behind our current crises of mass incarceration and mass deportation. The politics driving these policies, she asserts, is white America’s fear of demographic change.

Speaking frankly about her own epiphany some 20 years ago, the outspoken critic of America’s broken judicial and prison system confessed that as a civil rights attorney in the 1990s she initially bought into the prevailing narrative attributing the incarceration of millions of black men—mostly for minor infractions like loitering and selling drugs—to broken homes and bad schools.

As an attorney challenging racial profiling, she was unable to work with anyone who had been incarcerated—even for nonviolent offenses. “But by refusing to represent people with criminal records,” she explains, “I participated in the marginalization of the people most harmed by the system.”

Even felony probation, she added, has a lifetime effect on those convicted, permanently removing them from the job market, stripping them of the right to vote and preventing them from taking advantage of government support such as food assistance and financial aid for education.

What it all boils down to, Alexander says, is an “us versus them mentality.” That distance—that slippery slide to seeing others as less human—breaks down our sense of moral obligation. And whether or not it began as a deliberate strategy, our blatantly biased system continues to thrive as much through indifference as through intention.

Yet Alexander remains hopeful. “By speaking our truths unapologetically, with courage and compassion, we’ll create a movement… a gravitational force that will attract more and more people,” she predicts. “A fierce, warrior-like commitment to justice will birth a new democracy.”

And the role of artists and designers in this movement toward “bending the moral arc back in the right direction,” as President Rosanne Somerson posited in her opening remarks?

“Achieving justice is a creative act,” says Alexander. “Artists and designers are central to reimagining what our democracy can be—to creating something promising out of nothing. It’s up to us to reimagine what comes next.”