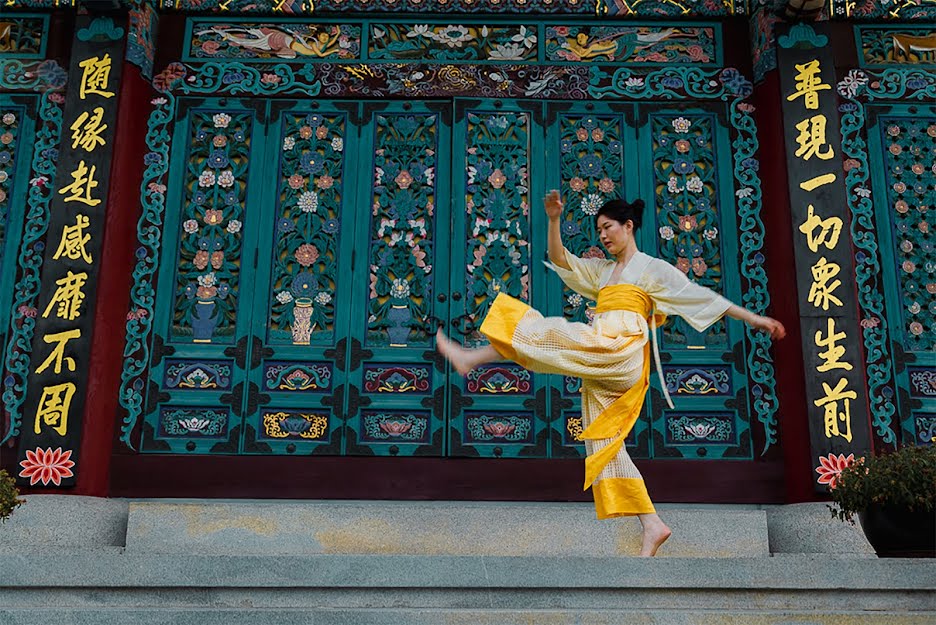 When the pandemic hit last winter, Fulbright fellows around the world were sent home, but recent Brown/RISD grad Ying Bonny Cai BRDD 18 AP was able to complete her year abroad. “South Korea may have been the only country that allowed Fulbrighters to stay,” says Program Advisor Lisa Cramer. “Our other four overseas fellows were evacuated in March, but Bonny stayed and had a great experience.”

“I was really lucky to be there when COVID hit, because the South Korean government handled the pandemic relatively well,” says Cai. “Everyone wore masks right away and followed the safety protocols. The museums all closed, but luckily I had already finished my museum research.”

Cai applied for the fellowship to study traditional Korean apparel, or hanbok, which she began investigating as an Apparel Design major at RISD. A Chinese-American raised in Michigan, she sought to explore her Asian roots and those of her Korean-American friends.

“The scholar Marianne Hirsch coined the term postmemory in reference to second-generation Holocaust survivors who could imagine the experience based on their parents’ stories,” Cai explains. “That idea really resonates with me. My parents told me stories about the Cultural Revolution, and my Korean-American friends’ parents told them stories about the Korean War.”

Her focus on Korean traditions, rather than Chinese, was inspired by a Wintersession project she completed as a junior with the guidance of Korean immigrant Jeung-Hwa Park—a senior critic in the Apparel Design department. “I remember finding a book on Korean apparel in the RISD library and seeing a traditional woman’s jacket with a silhouette that looked like outstretched wings,” Cai recalls. “Wings and freedom and female empowerment are important themes in my work, so that jacket really moved me. It was so different from the Western and Eurocentric fashion I had been exposed to.”

Cai’s first Fulbright application was actually rejected, and she advises current applicants not to be discouraged if they don’t succeed the first time. “I was devastated and spent three full days in bed,” she recalls. “But my mom called and talked some sense into me.”

Once she made it to Seoul, Cai studied traditional examples of hanbok and interviewed contemporary designers and craftspeople bringing its key elements—line, transparency, wrapped fronts, simplicity—into the present day. “This project seeks to present hanbok both as a means of understanding Korean history and culture as well as a conduit for contemporary Korean voices to express their identity and dreams,” she says. “The interviews I conducted provided insight into the diverse and sometimes conflicting opinions on the meaning of hanbok in modern-day South Korea.”

Although she’d studied some Korean before traveling, Cai says she had to contend to some extent with a language barrier. “But art is truly a universal language,” she adds, “and a lot of the crafts I was learning—traditional sewing, dyeing and knot-making—rely on visual instruction. So even if I couldn't quite understand the words, I could watch the repeated motions.”

Her three-part final project featured a 25-page cultural policy report for the Ministry of Foreign Affairs, a comprehensive website that is the first of its kind to educate an English-speaking audience on hanbok and a collaborative piece with Korean-American friends expressing “the traumas and triumphs of diaspora experience.”

“The hanbok community in South Korea is still growing,” says Cai. “It’s a little scattered and very scrappy. After the Korean War a lot of energy was focused on reconstruction and rebuilding the economy. But now Koreans finally have the luxury to focus on preserving and reviving traditions, which is really wonderful.”

Recent graduates will advance interesting art and design research in Africa, Asia and Europe during the 2019–20 academic year.